SigFox Vs. LoRa: A Comparison Between Technologies & Business Models

For years, Sigfox and LoRa were the major competitors in the LPWAN space. And while the business models and technologies behind the companies are quite different, the end goals of both Sigfox and the LoRa Alliance are very similar: That mobile network operators adopt their technology for IoT deployments over both city and nationwide low power, wide-area networks (LPWANs).

In recent years, however, as new competitors have entered the market (namely Narrowband IoT, or NB-IOT and LTE-M), Sigfox seems to be struggling. From a technical standpoint, its network performance in the U.S. is not nearly as good as in Europe. (Sigfox is a French company.) That’s in part because the frequency band it uses in the U.S.—900 MHz—is susceptible to high levels of interference; it’s also due to the FCC’s time-on-air limits (400 ms), which weakens the link and limits the area the technology can cover in the U.S.

It hasn’t helped that the IoT has been much slower to catch on than people thought it would just two or three years ago. Since Sigfox’s business model relies on royalties from network operator resales, revenue has been modest at best. On top of all that, Sigfox has experienced a lot of turnover lately, indicating that it has challenges to overcome in terms of retaining top talent.

On the other hand, it seems clear that LoRa will remain a niche connectivity technology, particularly as other technologies like NB-IoT and LTE-M come to market. Based on the environment today, there’s almost no chance of a nationwide LORA network coming to fruition in the U.S.

All that said, the focus in IoT connectivity seems to have shifted. Are Sigfox and LoRa still competitors? Yes. But people aren’t as focused on network technology these days—they’re focused on use cases and applications. These technologies have been relegated to their proper place—they’re tools, nothing more.

Still, LPWANs aren’t going to be displaced anytime soon, which makes a discussion of Sigfox vs. LoRa still relevant. Keep reading to learn about the prominent differences between these technologies and which applications they are best suited for.

Sigfox is a narrowband (or ultra-narrowband) technology. It uses a standard radio transmission method called binary phase-shift keying (BPSK), and it takes very narrow chunks of spectrum and changes the phase of the carrier radio wave to encode the data. This allows the receiver to only listen in a tiny slice of spectrum, which mitigates the effect of noise. It requires an inexpensive endpoint radio and a more sophisticated basestation to manage the network.

In this article, we’ll compare LoRa (a chirped modulation format) and LoRaWAN (a MAC-layer protocol) to SigFox. LoRa is a spread-spectrum technology with a wider band (usually 125 kHz or more). Its frequency-modulated chirp utilizes coding gain for increased receiver sensitivity.

LoRaWAN looks at a wider amount of spectrum than SigFox (and thus gets more interference). However, because it's looking for a very specific type of communication, the elevate noise due to a larger receiver bandwidth is mitigated by the coding gains. Practical link budgets are about the same for SigFox and LoRaWAN.

Looking for a more full-featured LPWAN technology to support your application? Download this guide to learn about Symphony Link and how it compares to LoRaWAN.

The Sigfox business model takes a top-down approach. The company owns all of its technology, from the backend data and cloud server to the endpoints software. But the differentiator is that SigFox is essentially an open market for the endpoints. Sigfox gives away its endpoint technology to whatever silicon manufacturer or vendor wants it as long as certain business terms are agreed upon. Large manufacturers like STMicroelectronics, Atmel, and Texas Instruments make Sigfox radios. Sigfox thinks that keeping the application cost low is the way to drive people to its market.

Sigfox endpoints use commodity MSK radios, and they are relatively inexpensive. You can get a chip for a few dollars and a module for less than $10 in high volumes, so Sigfox partners aren't bringing in much money from the hardware itself. Sigfox makes money by getting network operators to pay royalties on reselling its technology stack to customers. In other words, Sigfox gives away the hardware enablers but sells the software/network as a service. In some cases, the company actually deploys the network and acts as the network operator. This is the case in France and in the U.S.; when you buy LPWAN service there, you’re operating on a Sigfox network.

Sigfox’s ultimate goal is to get large network operators from all over to world to deploy its networks. It has raised more than €300 million to do this and has great global reach. Sigfox has been around since 2009 (longer than almost everyone else in the space), and it’s likely the most aggressive marketer in IoT.

Sigfox is of the opinion that it’s easier to work with mobile network operators or deploy networks itself and charge a small recurring fee than to sell expensive hardware at the endpoint. However, there are some challenges associated with this business model. For one, if you want to deploy a Sigfox network, you have to work directly with Sigfox—there isn't another option. Additionally, only one Sigfox network can be deployed in an area because the company has exclusive arrangements with network operators when they work together.

The LoRa Alliance has a different strategy. They would say they’re more open than Sigfox because the specification that governs how the network is managed is relatively open. You can download the specifications and join the LoRa Alliance, and any hardware or gateway manufacturer can build a module or gateway that conforms with LoRa specifications. The catch is that the only company that makes the radio for LoRa is Semtech. (Some other manufacturers make system-in-package devices with Semtech silicon or IP inside.) So while the ecosystem itself is open, it does have a closed element.

One nice thing about LoRaWAN’s open standard is its potential to be flexible—it’s not going to be driven by a specific company. In practice, this does result in slower development, because you’re developing standards by committee.

The LoRa Alliance believes that openness creates adoption, so members stress that anyone can join the Alliance and build hardware to support it. The trick here is how companies who adopt LoRaWAN can add value. Just like Sigfox, the LoRa Alliance wants network operators to deploy the LoRaWAN network—but they also want private companies and startups to do so. To allow for this, they’ve developed some discussion around roaming network to network. The business and technology around this idea isn’t fleshed out yet, so one of the next steps will be to figure out how to allow for roaming from public network to public network and private network to private network.

Use Cases For LoRa vs. Sigfox

Fair warning: A discussion on use cases isn’t totally fair because, for most people, Sigfox is not an option—the network is not available everywhere. LoRa, however, is an option for most people because, with LoRa, you can set up and manage your own network. That aside, LoRa and Sigfox are equivalent when it comes to use cases, with a few caveats to be aware of.

LoRa is likely the better option if you need true bidirectionality because of the symmetric link. So if you need command-and-control functionality—for, say, electric grid monitoring—LoRa is your best option.

With Sigfox, you could use bidirectional command-and-control functionality, but to work appropriately, network density would need to be higher (due to the asymmetric link). Therefore, it is better for applications that send only small and infrequent bursts of data, like alarms and meters.

Other than these minor differences, Sigfox and LoRa serve similar markets. It’s worth noting that both technologies were originally designed for the European regulatory bands between 865 and 868 mHz, and they’ve both faced challenges in coming over to the regulatory markets in the U.S. Progress is being made, and both technologies are working toward optimization for FCC use.

When it comes to IoT connectivity, it’s not about the network—it’s about the technology. The standardization and ubiquity of any particular network isn’t likely to happen anytime soon.

Visit our website to learn about the many other advantages to Symphony Link. Or, if you’d like to discuss your specific use case with a Symphony Link expert, get in touch. 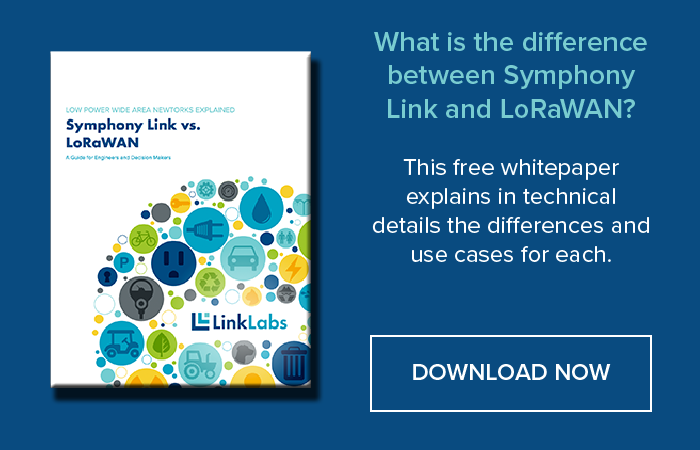