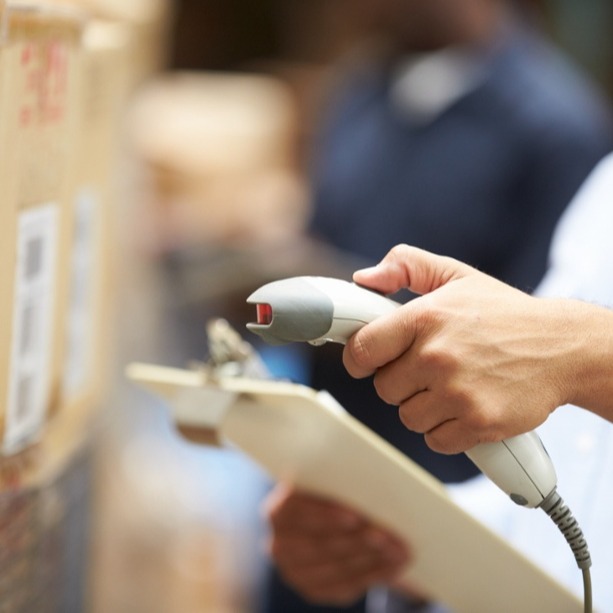 By definition, a real-time location system (RTLS) is just that—a system. Thus, with the exception of some GPS tags that report data directly out via cellular, the majority of RTLS technologies have at least three necessary components:

Below, we’ll walk through some specifics on five of the most common location tags available in different RTLS technologies.

5 Types Of Tags Used in Location Based Systems

Ultra wide-band (UWB) readers transmit a very wide pulse over a GHz of spectrum. The readers then listen for chirps from the UWB tags. These tags have a spark-gap-style exciter that generates a little pulse within them, which creates a short, coded, very wide, nearly instantaneous burst. The readers then report very accurate time measurements from the tags back to a central server.

UWB systems are most commonly used inside of barcode scanners for use in warehouses and other sophisticated supply chain applications. When someone goes to scan a box during inventory, pulling the trigger of the scanner both reads the barcode and sends out a UWB pulse. The system then localizes precisely where the item is—down to one centimeter of space—based on that pulse.

If you’re looking at an ultra wide-band system, there are a few things to consider. First, while all of the frequency transmitted gives you tremendous accuracy, but has a weak signal, so the frequency doesn’t interfere with electronics in the area (i.e., cell phones, WiFi, etc.). This means the range of ultra wide-band is pretty low. Second, It requires careful calibration, which makes installation complex. And finally, if you use a UWB system, you need a good data connection, because the system is passing a lot of real-time tracking information around. Thus, you need to synchronize all the readers together with very stable and low-jitter IP networks.

Most WiFi tags operate pretty far down the OSI stack, as the WiFi tags are not fully provisioned TCP end points. In other words, the WiFi tracking tags send frames to the WiFi network, and the access points know how to process the frames as part of the normal 802.11 traffic—but they’re not technically “full” WiFi devices. This allows the WiFi tags for tracking to wake up and beacon out a WiFi signal heard by multiple access points, which is then time-stamped and sent to the cloud. This allows WiFi RTLS solutions to be more power-efficient than they would be otherwise. (WiFi still isn’t at the top of the list in terms of battery life for RTLS, but this gives them months to years of longevity instead of days.)

In this sense, WiFi RTLS is similar to ultra wide-band. UWB tags have a

much weaker signal and require more readers than you would need for WiFi, but the UWB signal is almost a GHz in bandwidth, which gives you incredible location accuracy. WiFi bandwidth, on the other hand, is a function of which band it’s using. If you’re using 5 GHz, then you’re able to use up to 80 MHz of bandwidth. This gives you decent location accuracy but leaves around a meter of uncertainty at the minimum (and likely more).

One of the major upsides to a WiFi RTLS solution is that you can often use existing WiFi infrastructure, so long as your WiFi system can support it.

There’s nothing very technical about infrared tags, as they’re simply transmitting codes with light, and that code is picked up from ceiling-mounted readers. While this requires extensive infrastructure, it’s very simple in a technological sense. The benefit to this is that infrared RTLS solutions are pretty foolproof. They use light instead of radio waves (is there really a difference?), so this solution can’t go through walls. This is a benefit when it comes to RTLS because if the system says an asset is in room 4B, it is in room 4B without a doubt. Radio-based systems have more trouble with false positives, as the radio waves can sometimes be picked up by other readers through walls.

As an aside, it’s not common to see an infrared RTLS solution by itself; it’s often paired with either an active RFID or a WiFi system to cut down on those systems’ issues with inaccuracy.

Passive RFID tags are very short-range and require many high-power readers in order to function as a real-time location system (RTLS). The benefit is that passive RFID tags are by far the least expensive of all RTLS tags. There is some hesitancy in the the medical space to have so much RF energy in the vicinity, making passive RFID real-time tracking less common for some medical use cases and more common at airports (for luggage tracking), shipping facilities (for box and pallet tracking) or in stores and libraries (for anti-theft or point-of-sale metrics).

KitCheck is an exemption and a great example of how to use passive RFID in the medical space. This company creates boxes that you put pharmaceutical trays (from a crash cart, for instance) inside of, and at the click of a button, it will tell you what is missing. Everything in the box has a passive tag on it, and this box acts as the high-power reader.

Active RFID tags transmit a short-range radio signal. Readers pick up this signal and measure the received signal strength (through either a one-to-one match or a trilateration between multiple readers) to get a location for the asset.

Some active RFID location tracking systems like AirFinder use iBeacon tags for a few reasons. First, they’re ubiquitous and can be found anywhere. Second, they are inexpensive and only cost between $2 and $10 a piece. Third, iBeacon tags aren’t proprietary. But with all that said, there’s nothing special about using a BLE (Bluetooth Low Energy) tag of any sort, as any low-power radio tag will do.

One of the considerations for active RFID is that readers may pick up signals through walls or floors, making it more prone to false positives than, say, an infrared location system may be. A great deal of the hard work on our AirFinder system has gone into creating sophisticated algorithms to calm down the floor and room hopping.

If you’re interested in real-time location systems, you may want to take a closer look at the types of technology available and how to choose between them. The white paper below will help you take the first step toward implementing a successful asset tracking solution at your organization.