As the Internet of Things (IoT) industry continues to boom, many companies have begun to develop Real Time Location Systems (RTLS) for commercial use cases. There are several protocols that can be used in RTLS to determine a tagged asset’s location. Some newer technologies being used are Phase Ranging and Angle of Arrival (AoA). In this article, we will explore both technologies, as well as benefits and drawbacks to each, as part of a RTLS.

What is Phase Ranging Technology?

Phase Ranging determines an asset tag’s location by measuring the round-trip phase shift of signals sent from tag to beacon, at several different frequencies. This phase information is then used to infer the round-trip distance. Since low-power BLE radios can measure phase with high precision, this technique enables ranging technology at a much lower cost than time-based systems (such as UWB).

Once the tag has measured ranges to at least four beacons (ideally >6), it can trilaterate its location. All of this happens within a few hundred milliseconds.

What is Angle of Arrival (AoA) Technology?

Similarly to Phase Ranging, AoA uses phase measurements for location—however, that is where the similarities end. Rather than measure a range from tag to beacon, AoA estimates a line of bearing from a tag to a locator (a device that receives tag signals). The locator does this by utilizing an antenna array and switching between elements during signal reception. By comparing phase shifts between these elements the angle of the incoming signal can be calculated. When the signal from a tag is received by multiple locators, the tag location can be inferred by estimating where the ‘rays’ from each locator intersect.

Now that you have a general understanding of Phase Ranging and AoA, let’s explore key functionalities, benefits, and drawbacks of these RTLS communication protocols.

Accuracy is arguably the most important metric of an RTLS, yet also the most nuanced. As an example, here's a Cumulative Distribution Function (CDF) of location accuracy from a warehouse using Link Lab’s OnSite XLE® Phase Ranging system. 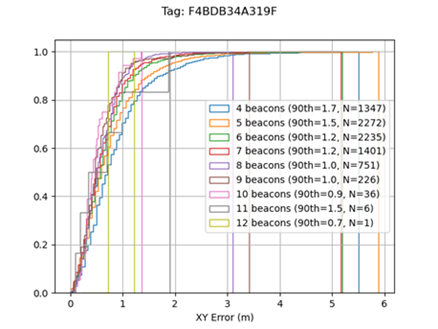 To provide realistic expectations, we specify the 90th percentile accuracy (meaning the accuracy that was achieved 90% of the time; these are the stats specified in the plot legend along with the number of beacons used in the fix)—in this example, it's around 1.2 meters. However, if we instead used the 50th percentile as our spec, we could say it has an accuracy of 40cm. When comparing system accuracy specifications, it is crucial that the underlying methodology is the same, otherwise it’s not a fair comparison.  After all, looking at the above plot, notice that some percentage of the time millimeter accuracy was achieved. Less scrupulous system vendors may choose to use lower percentile numbers to make their system appear more accurate than it is—so always ask under what conditions the accuracy was measured, and what statistical benchmarks were used.

Understanding the differences between Phase Ranging and AoA is vital when making a decision on which asset tracking solution to implement.  That said, Phase Ranging is generally regarded as the better overall technology. At Link Labs, our AirFinder Onsite Xtreme Low Energy (XLE®) uses Phase Ranging technology to provide users accuracy without compromising on tag battery life and cost. For more information on XLE®, book a demo today.