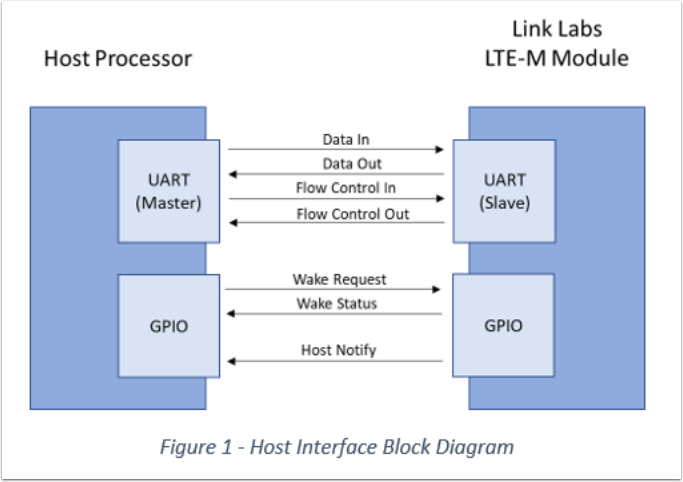 The UART connection utilizes a Master/Slave protocol, with the Link Labs LTE-M module always running in slave mode. The protocol allows for data exchanges to be initiated by both master and slave devices, although the initiation mechanism is different.

The Link Labs Module Processor (UART Slave) cannot initiate a UART transaction by sending data bytes directly. Instead, the slave processor initiates the transaction by asserting the Host Notify GPIO line. The expectation from that point forward, is that the master should immediately respond to the level change on the Host Notify line by sending a UART command to query the reason for the notification, through a command called the “Host Interface Interrupt Flags”. Based on the response to that command, the master should determine what additional actions and communication is necessary.

The Link Labs LTE-M module is a highly optimized for extremely low-power operation, in order to achieve a very long battery life on small form factor batteries. In order to meet these design goals, the LTE-M modules typically goes to a low-power sleep mode automatically when it deems appropriate. The host processor is required to wake up the LTE-M module (and wait for confirmation that it is awake), while UART transactions occur. A diagram of the required signal waveforms is shown below, and the sequence is described as follows: 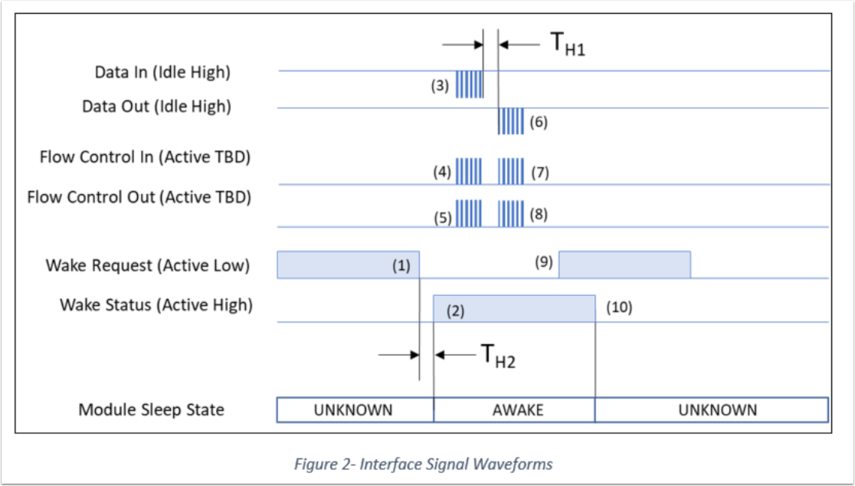 When the host is ready to initiate a UART transaction, it does not know whether the LTE-M module is in the sleep or awake state. The host initiates the transaction by asserting the Wake Request line (1). Within TH2 seconds, the module will assert the Wake Status line (2). From that point forward, the host can safely assume that the module is awake.  The module will remain awake for as long as the Wake Request line remains asserted.

Once the host is finished sending UART commands and receiving UART responses, it should allow the module to go back to sleep (if low power operation if desired). This is communicated by de-asserting the Wake Request line (9). At some point after this, the module will de-assert the Wake Status line (10). Once the Wake Status line is de-asserted, the host does not know whether the module is awake or asleep. This marks the end of the transaction.

Note that the Cloud Server is accessible from any internet enabled device with the proper access credentials, effectively creating a secure wireless Internet-Of-Things network with any LTE-M Module that is in an LTE-M coverage area. 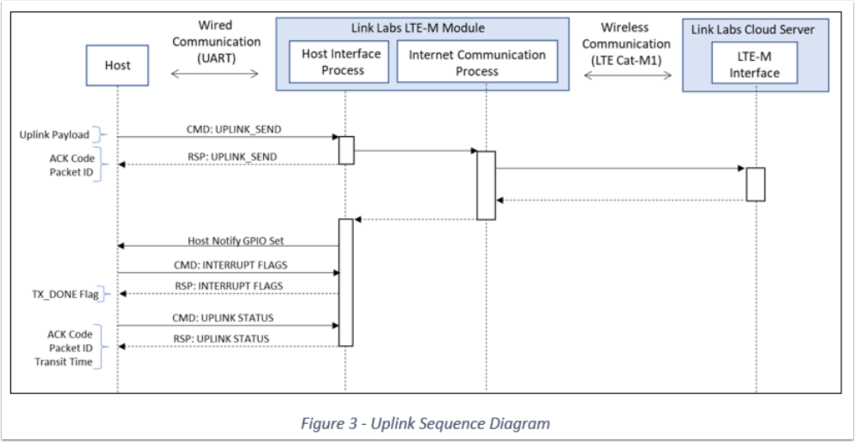 The sequence begins by the host sending the uplink payload over the UART in the UPLINK_SEND command. Immediately after that, the LTE-M module will respond with an ACK code (typically indicating success) as well as a Packet ID that is to be associated with this uplink attempt instance in the events that follow. As is shown in the diagram, a success code received at this point only indicates a successful queueing of the uplink payload, not a successful delivery to the cloud destination. If an error is returned, then the uplink payload was not able to be queued and the uplink attempt is terminated. The host should at that point determine if it should try again immediately or wait until a later time.

If the UPLINK_SEND command returns a success code, the LTE-M Module will then attempt to push the message up to the cloud server. In a properly configured device this will typically be successful, unless the device is out of the coverage area of the LTE-M network. All further events in this sequence are optional and purely for information purposes or for system optimization purposes (e.g.- the Notify GPIO allows a host processor to enter a low power Wake From Interrupt state).

Regardless of the uplink attempt result, the LTE-M Module will always generate a status report on the uplink attempt. First, the Host Notify flag is set. The expected action from the host at that point is to send the INTERRUPT FLAGS command. The response to that command will be “TX_DONE” if the uplink attempt is finished, or some other flag if a different event has occurred.

If the “TX_DONE” flag is set, the host is expected to send the UPLINK_STATUS command, to find out the result of the uplink attempt. This command will return an ACK Code (success, or an error code indicating the reason for failure), a Packet ID (specifying exactly which uplink attempt instance is being reported on  this will match the Packet ID returned in the UPLINK_SEND command) and a Transit Time (how long the uplink sequence took from the reception of the initial UPLINK_SEND command until a confirmation from the Cloud server was received).

The LTE-M module contains a downlink mode referred to as “Mailbox” mode. In this mode, any internet enabled device can send a message to an LTE-M Module, through the Cloud server. The message is cached in the Cloud server, and remains there until the LTE-M Module is commanded locally to “check its mailbox”. This command triggers the LTE-M module to query the Cloud Server, for the presence of a cached message.

The mailbox mode sequence is very similar to the Uplink sequence. The Mailbox Request is treated as an uplink message, although there is no uplink payload to deliver. Hence, the Mailbox Request update is given a Packet ID and an uplink status report, identically to that of an uplink message. Additionally, if a downlink message is present in the Cloud Server, the “RX_DONE” Interrupt Flag will be set as shown in Figure 4. If the RX_DONE flag is set, the host is expected to send the MESSAGE_RECEIVE command, in order to extract the downlink message.

All UART commands must conform to this general format: