Following the 1.4.0 release, the Symphony Link protocol supports over-the-air transmission of large files to end-nodes. This capability is useful to update the firmware of the host system, or the Symphony Link module itself.

The protocol sends a file in segments. Each segment is 107 bytes long, with the maximum number of segments in one transfer being 2400. The protocol can therefore transfer a maximum file size of 256 kB.

Diagram of a File Transfer

Checkpoint A: Initializing the client

Checkpoint B: Preparing the file transfer 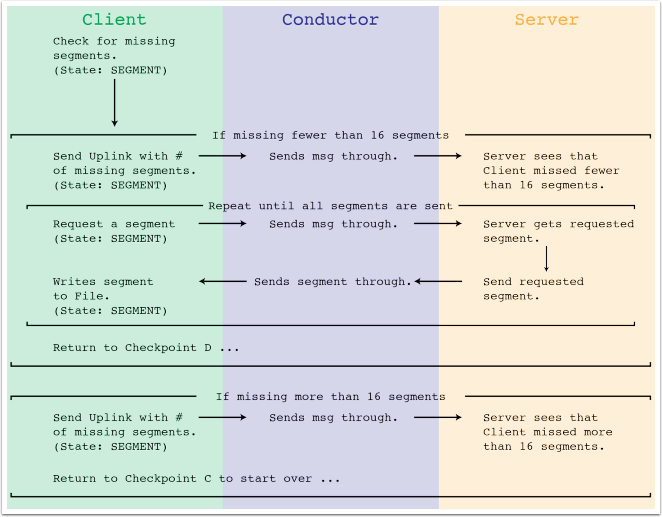 The following Python scripts provide an example implementation of over-the-air file transfer. The scripts work together to transfer a file from your local machine (the server) to Conductor, to a Symphony Link gateway, over the air to an evaluation board, and finally across the module's host interface to the host system (the client). The client is assumed to be a computer controlling the evaluation board via USB.

This Python script is a tool to perform the server portion of the file transfer protocol.

This Python script defines the uplink and downlink packets used during file transfer. It is used by the client and the server scripts.

This Python script performs the client portion of the file transfer protocol.