The LL-RLP-20 or LL-RXR-27 module is designed to be controlled by an external host microcontroller. Link Labs has developed a host interface to operate the module in Symphony Link mode or NoMAC mode. These modes are described below.

Symphony Link is Link Labs' proprietary over-the-air protocol. It implements a star network based on a slotted Aloha scheme. A simple Symphony Link network is pictured in the figure, above.

In Symphony Link mode, the module is controlled using a small set of high-level functions. The details of network operation -- timing, frequency selection, data rate, transmit power, encryption, etc -- are automatically controlled by handshaking between the module and the gateway to optimize network capacity, range and power consumption.

The LL-RLP-20 and/or LL-RXR-27 module is designed to be controlled by an external microcontroller (MCU) of the user's choosing. This MCU is referred to as the external host and it communicates with the module using a point-to-point Universal Asynchronous Receive/Transmit (UART) connection. The library of commands available to pass of the UART connection (a C library), as well as the physical connection itself, are referred to as the host interface. This article describes the host interface in detail.

The host interface implements a master/slave protocol where the external host is "master" and the module is "slave." The protocol allows both the master and slave to initiate data exchange, although the mechanism is different for each.

Initiation by the Master

Initiation by the Slave

If/when the module asserts the host interrupt line, the external host uses appropriate UART Command Packets to query the reason for the interrupt, through a data field called the Host Interface Interrupt Flags (a.k.a. IRQ Flags). Depending on which flags are set, the master proceeds on a flag-specific basis, possibly issuing further commands to continue the data exchange.

The Command Packets sent to the module and the Response Packets it returns adhere to specific formatting. The following tables describe the format of the Command and Response Packets, respectively. Each type of packet concludes with two checksum bytes, used to verify the integrity of the packet. The compute_checksum function, used to calculate the checksum, is described below.  The command bytes themselves -- the "OP codes" -- are listed in the Link Labs Host Interface Library documentation.

The following function computes the checksum used by the Host Interface to verify the integrity of Command and Response Packets.

The module will boot automatically when power is applied and every time the reset line is asserted and then de-asserted. The module notifies the external host that the boot sequence is complete by latching the "reset" IRQ flag and asserting the host interrupt line. The external host must wait for the reset IRQ flag before interacting with the module. 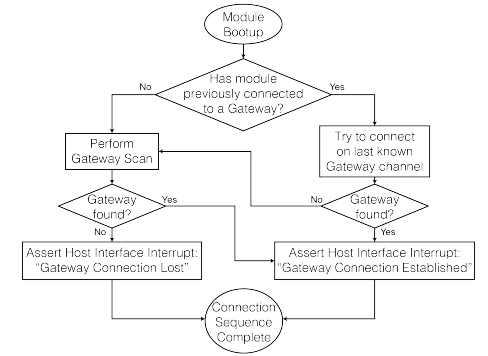 If a module connects to a Symphony Link gateway, it stores the network configuration in persistent flash memory. On subsequent reboots, the module will first attempt to reconnect to the same gateway. If the gateway is absent, the module will clear the stored network configuration and search the entire available spectrum for other in-range Symphony Link gateways.

This library is intended to run on the external host, which can be nearly any microcontroller or PC with a UART interface. It is written in ANSI C (C89), which is supported by nearly every C compiler.

Please refer to this website for detailed documentation of the host interface library.

A good example of implementing the LL-RLP-20 or LL-RXR-27 is the Symphony Link task: 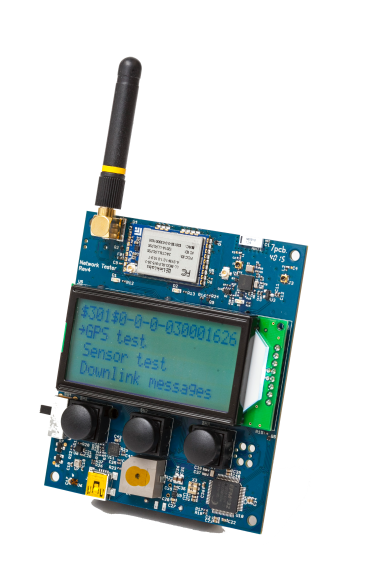 This article describes several procedures to update firmware to a LL-RLP-20 or LL-RXR-27 module.

If you are trying to update/modify the firmware of a module mounted to an evaluation board, it is easiest to use Prelude's built-in firmware update capability.

At the time of manufacturing, the Renesas microcontroller (Renesas R5F5116ADNE) on the LL-RLP-20/RXR-27 is programmed with the most recent firmware release. During this process, each module is assigned a unique MAC address and encryption keys.  A bootloader is also loaded onto each MCU, to facilitate future firmware updates.

The preferred method to re-program a module is to flash firmware to the module via USB from a computer. To implement this method, the module's carrier board must include a USB-to-UART bridge. This allows the PC to interface with the module's UART bus. For example, the LL-RLP-20/RXR-27 evaluation board offered by Link Labs includes a Silicon Labs CP2104 USB-to-UART bridge.

Bootload the module while attached to a computer

This method assumes the module can interface to a computer via a USB-to-UART bridge. For example, the LL-RLP-20/RXR-27 evaluation board includes a Silicon Labs CP2104 USB-to-UART bridge. The firmware update can be achieved using (Method 1) the bootloader_upload_firmware.py script provided by Link Labs or (Method 2) using a terminal like Tera Term.

Download the bootloader_upload_firmware.py Python script, provided by Link Labs.  This script uses the standard xmodem and pyserial libraries, so please ensure they are added to your Python installation. The script also uses ll_ifc.py, a Python wrapper for controlling a module from a computer. 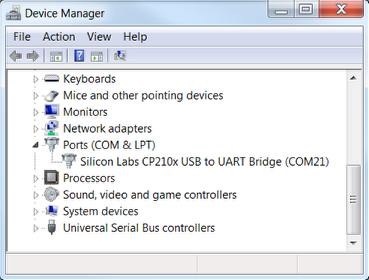 The bootloader on the LL-RLP-20/RXR-27 has a human-readable interface. You can view this interface by connecting a terminal to the module's UART.

Connect the module to your computer via USB and open a terminal. In this example, we're using Tera Term.

From Tera Term's Setup menu, select Serial Port. Verify the serial port is the correct COM port (in this example, COM21), with the following settings: 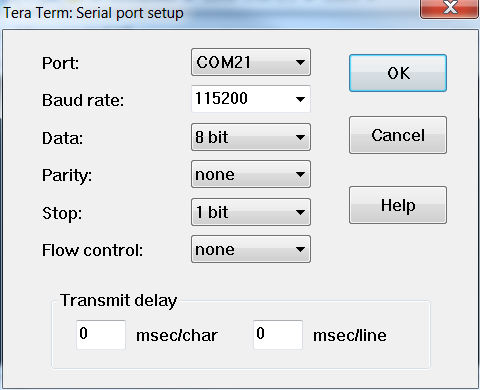 Boot the module in bootloader mode. This can be achieved using host interface commands, or by holding the BOOT pin low while rebooting the module. (This article describes how to place an LL-RLP-20/RXR-27 evaluation board in bootloader mode manually.) The Tera Term window will update with the following:

Send the u character by typing 'u' while the Tera Term window is active. This will begin the bootloading process. Then immediately perform the following steps.

From Tera Term, select File > Transfer > XMODEM > Send. A file tree will appear; navigate to the appropriate encrypted binary file and click Send. (You can download the most recent release here.)Tera Term will send the new firmware to the module. 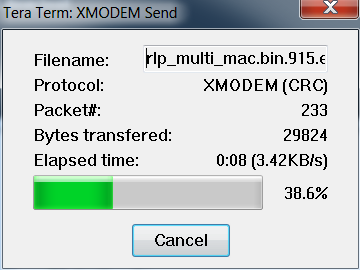 After successful completion, the Tera Term window will update with:

Any other response indicates an error in verifying the firmware image. Once the modules sends this response, the firmware has been validated and loaded, and you should send the r character to reboot the module into the new firmware.